We packed up the truck, said goodbye to new friend Atlas The Dog, and headed out for another long drive, this time to Billings, Montana. We stopped in Helena for lunch at the Staggering Ox for their famous patented “Clubfoot” sandwich, drove through Carroll College (trying to show Beck as many college / university campuses as possible so that he has a feel for what’s out there), and then after a long day, arrived at our first hotel with a swimming pool! We swam for a bit and then wanted to head out for a quick dinner…. only to find out that the truck had flat tire. Argh. Took a bit to get the full size spare on (bike rack on the back made it difficult to get the spare off), but got that done and headed out to the Montana Brewing company in downtown Billings. Fried enchilada bites and the giant pretzel 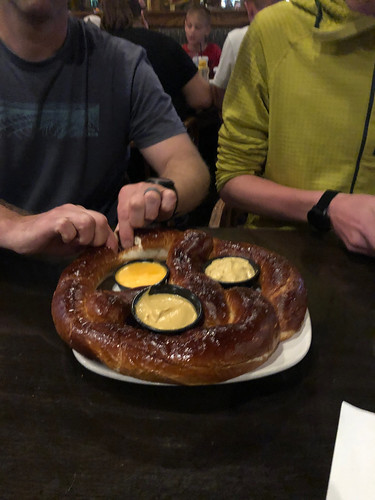 Up early to get the tire looked at, only tire place open on Sunday was Walmart Auto Center and the guys there were great. They plugged my tire, checked the torque on the spare, and had me on my way very quickly. A couple hours later we made it to our first historical spot, Pompeys Pillar National Monument: 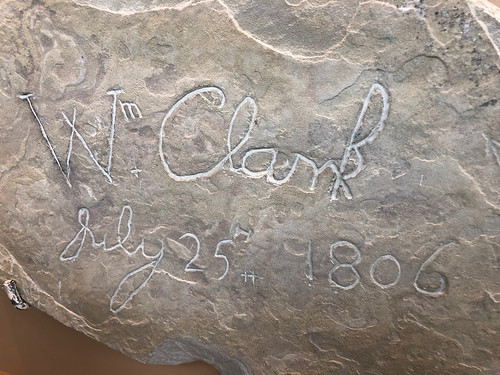 which had a new visitor center and a really nice walk / hike out to the rock that William Clark (of Lewis and Clark) etched his name into back in 1806. Definitely worth the stop, especially if you’ve got young kids studying American history.

A couple hours of driving later and we made it to Little Bighorn Battlefield National Monument, which is also well done. 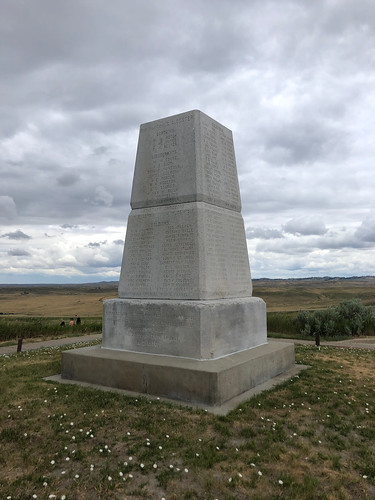 Lots of parking, lots of people, great visitor center, nice walk / hike around the facility. I later picked up a book (haven’t started yet) by Stephen Ambrose called “Crazy Horse and Custer: The Parallel Lives of Two American Warriors” that I should have finished before visiting but you should read it if you’re planning this trip.

An hour later and we were in Wyoming… 3 hours later we arrived at Devils Tower National Monument: 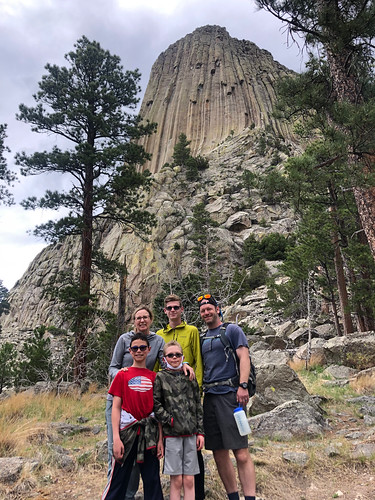 which we walked around on a nice 2 mile hike, toured the visitor center, and dreamed about climbing someday.

Another 2 hours later and we arrived in South Dakota and a short while after that, at our hotel in Rapid City, where we stayed for the next 3 nights. The pictures and website for this particular hotel made it look like a great spot… big waterslide, kids pool, decent looking rooms, but I would not recommend staying there. It was understaffed (probably as a result of Covid-19), poorly maintained, and hot, but then we didn’t drive all the way here to stay at a hotel.

One of the reasons we drove to South Dakota was to see Mount Rushmore: 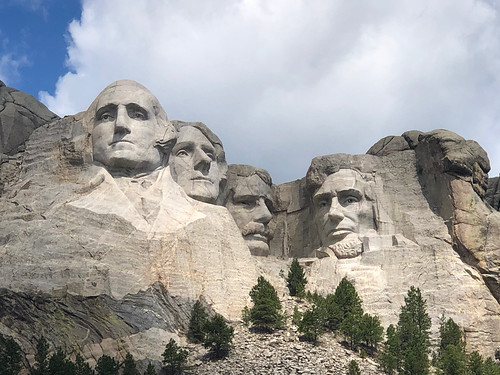 which was really well done given the volume of people that visit on a daily basis. We parked quickly, took the short hike around the base of the monument, took some pictures, and were back on the road by noon.

We stopped on a whim at climbing trail head just a couple miles north of Mount Rushmore called Wrinkled Rock, which is part of a larger rock climbing area called “Needles Of Rushmore”. 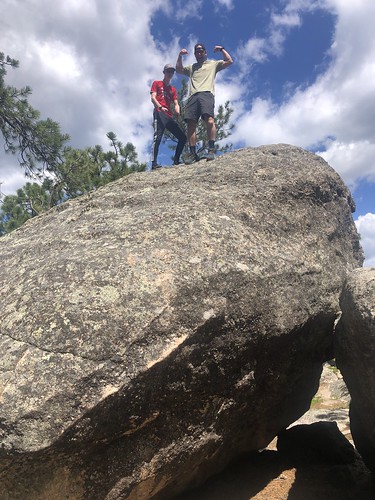 Tons of spots for sport / trad / top rope / bouldering, I wished that I had packed the climbing gear, I had no idea that they had rock climbing here. We walked a short trail to Bull Rock and scoped out the bolts and dreamed about climbing. Next time.

Shortly after that we arrived at the Crazy Horse Memorial, which had a nice museum and some great views: 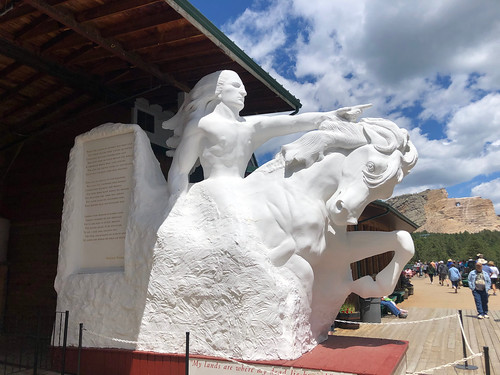 The day wasn’t over though… about an hour away is a great archeological museum called The Mammoth Site. Definitely worth a visit if you have small kids: 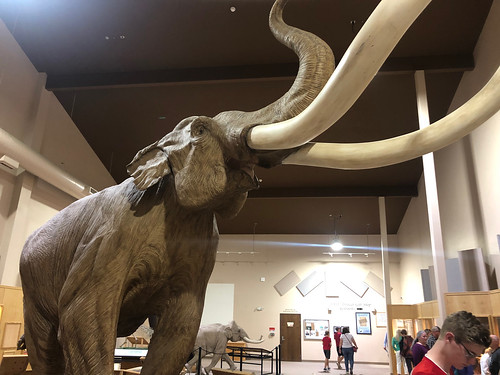 and interesting for adults who like science and history.

Back on the road… I had hoped to make a big day of visiting Badlands National Park, the Minuteman Missile Site, and the South Dakota Air and Space Museum… but it turned out that the Missile site is closed on Monday and Tuesday… the two days we were around the park. Boo… and the Air museum closed at 4pm, so we missed that as well because we spent most of the day driving through Badlands National Park:

and hiking on the trails:

which was really fun. It was really hot, but we saw bighorn sheep, a single bison (at the entrance), pronghorn antelope, and not a single rattlesnake (which was a good thing). Pro-tip: buy lunch or pack a picnic outside the park so that no one gets hangry while Mom and Dad enjoy the drive and want to go on short hikes.

After the drive, we stopped back at Wall Drug, which is hard to miss, for ice cream… and then back to Rapid City for some bookstore time at Books-A-Million (midwest Barnes & Noble?), and pool time.

We’ve mostly run out of things to visit and the plan originally was to drive to a trailhead in Wyoming to do a backpacking loop in the Wind River Range in Wyoming, but weather, injuries, and snow kept us in the car for a couple long days back to Oregon.

We visited Fort Laramie Historic Site early in the afternoon, which was really hot, very remote, and not remarkable… and then drove the rest of the way to our hotel for the night in Casper.

Three fun things to mention on what was mostly a long day of driving. Mom had wanted to stop at Independence Rock in Wyoming, but my initial mapping efforts made it look out of the way… but as we were driving, I saw a big rock outcropping with a visitor center… that turned out to be Independence Rock! 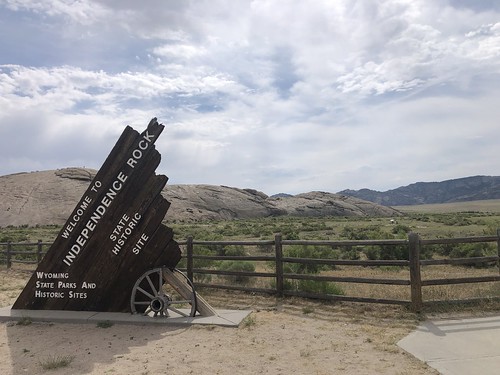 Beck and I climbed to the top and around the back: 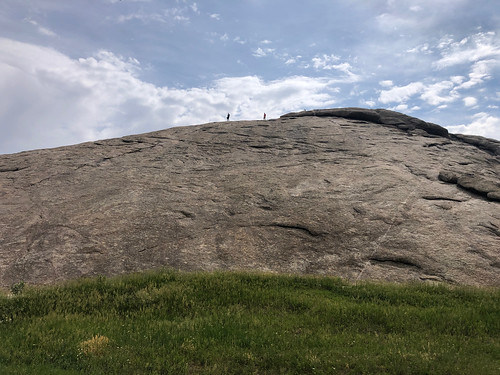 and everyone got to stretch their legs.

Second… after driving for a couple hours and literally not seeing a single gas station, I started to get worried because we only had about 100 miles of gas left. Google Maps took us on Route 287 and it’s remote… I don’t think I’ve ever driven so far without seeing a gas station. Make sure to fill up if you’re driving through Wyoming and not using the interstate.

Last, we finally made it to Twin Falls, Idaho… our second time here (last was on the way back from Yellowstone in May of 2016), and the last time had a great dining experience at The Twin Falls Sandwich Co, but it was closed by the time we got into town. Instead, we visited Koto Brewing Company, and had a great dinner… including smoked pulled pork nachos, which were very good. Extra points for the pickled Fresno red peppers.

Long drive home to very hot weather, but everyone was excited to sleep in their own beds.

I’d definitely do the trip again, but if possible, I’d find a way to do more things on the way home to break up the drive.