The family and I moved to England (Reading, which is a 25 minute train ride west of London) back in December of last year (2013) and one of the things on my list for our time here was a climb of some sort. Somehow I stumbled across the Three Peaks Challenge (which you can read about on wikipedia) and decided that I had do to it before we left and went back to the US. I tried to get a group of people at work to sign up as a team since that’d be the cheapest route and it would have been more fun but that turned out to be pretty difficult to get people to commit to, turns out for good reason. I ended up signing up last Tuesday night for a trip that happened this past weekend (August 22-23) through a site that offers trips once every couple weeks, bought a plane ticket to Glasgow and got (I think) the last hotel room in Fort William for Friday night.

The organizers picked me up in Glasgow at the airport with one other guy (Nervil?) and then we piled into the bus for a couple hour ride to Fort William. We drove through Glencoe (which is beautiful, some day I’d love go back and just walk around the mountains there) and then after tailing a really really really slow driver for about 30 minutes, finally made it into Fort William. I got a taxi to my hotel (Croit Anna Hotel, which was very quaint), had a nice dinner and got ready for the next day.

I took another taxi back to the Morrison’s parking lot in the morning after taking a panorama of the lake that the hotel was sitting right next to:

and then picked up (IIRC) about 10 liters of water and sat in the parking lot waiting for my van to come. I was the first one there so when the van arrived I got to pick out my seat, which was important because the van was packed to the gills with people. I got a single seat in the very back with a bunch of room to stretch out my legs and then after a brief walk through of the next 24 hours and introductions, we were off.

A short 10 minute drive later and we arrived at the base of Ben Nevis, where our first climb would start and end. I ended up bringing up the rear and chatting with what the team called a “trailer” or a “sweeper”, basically a guy that they had hired locally to make sure that any stragglers were taken care of. He was a super nice guy, worked for the local fire department and did this type of work on the weekends for fun. 15 minutes into the hike he pointed out a small valley where apparently a bunch of the filming for the movie Braveheart was filmed which of course I had to take a picture of because, freedom, or rather “FREEDOM!“: 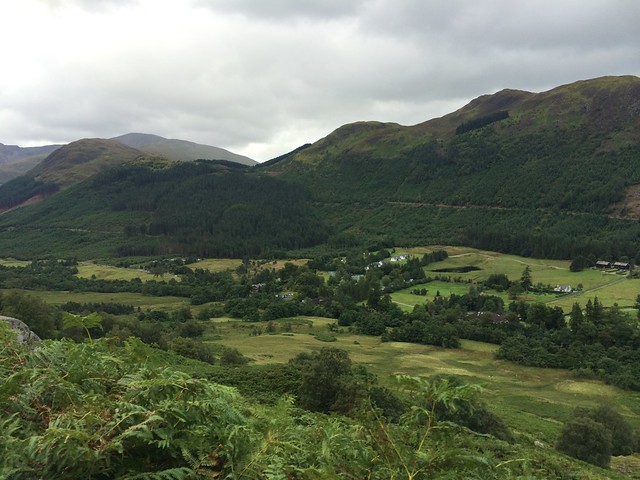 Ben Nevis is a beautiful mountain and because it a bank holiday weekend, the mountain was packed with people, which made for slow going at some points but I don’t think we (as a group) stopped a single time on the way up. The leaders set a fantastic pace and for the most part every single one of the 16 people on the trip was in great shape. I barely had time to break into my backpack for food and for a jacket when it started getting cold but man… the views: 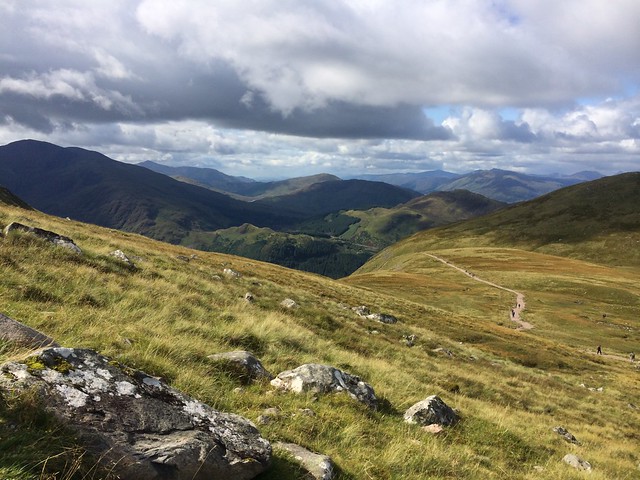 were like that most of the way up (if you took a breather and looked behind you on the trail). The weather was perfect: cool, but not too cold and the only rain I got on this mountain was a sprinkle when I was about 10 minutes away from the van and then it stopped and got sunny. But then the scenery started to change and the weather changed with it: 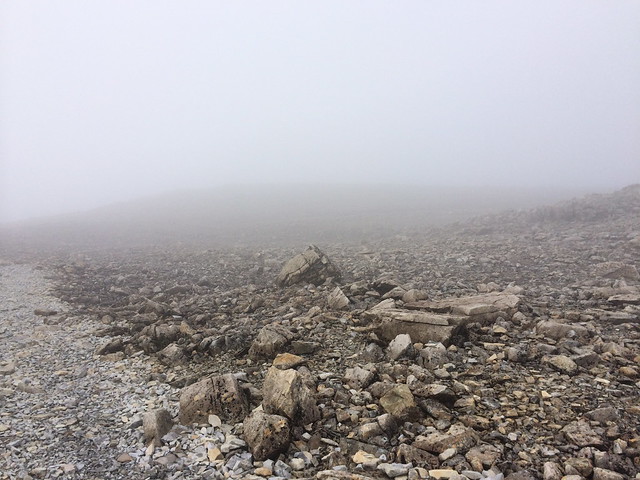 It got a bit cold up there, in fact cold enough that as we were starting our descent it started to snow, just teeny little flakes barely floating out of the sky. I stayed at the top for about 10 minutes, took a couple pictures, ate some dried fruit and granola and then headed back down. The views going down were just as amazing: 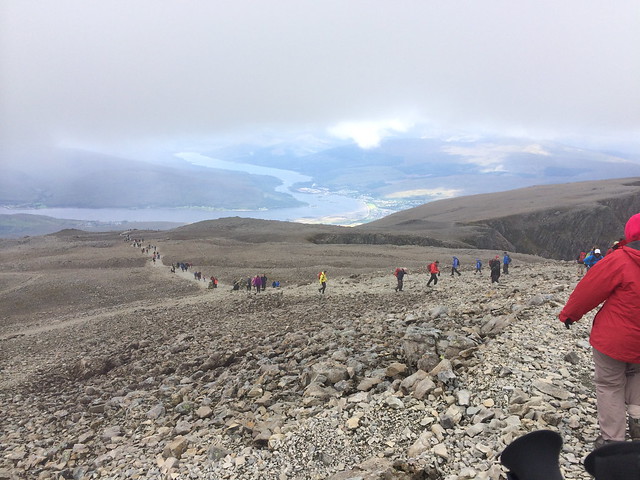 At this point I wasn’t really with anyone in the group so I figured I’d try and go faster on the descent which worked out alright for about a mile or two and then I kicked a rock and took a nosedive, luckily not breaking a wrist in the process. From there on out I slowed it down a bit but I think I ended up the 3rd or 4th person off the mountain. Total time: 4:38 for 10.5 miles and 4435 feet elevation gain.

The tour company made everyone some coffee or tea and we were encouraged to stretch out and changed clothes before heading back into the van. I took my boots and socks off and immediately changed into my slippers (one of the guys on the South Sister climb I did last year recommended having a pair of flip flips or slippers that you can change into after a hike and YES, highly recommended) which saved my feet from having to cooped up in boots for the 6 hour drive down to the next mountain. Turns out my feet, at least the bottom of my feet, wasn’t the thing I needed to worry about, more on that later.

The 6 hour drive to Scafell was brutal, I didn’t have enough food so at one of the stops I saw one of the guys at Burger King getting a Whopper, no cheese. At first I thought he might be crazy but then thought, “hey, I need food in my body badly” and so I ordered a Double Whopper, no cheese, no fries… and man that tasted good.

Some number of barely tolerable hours later we arrived at the base of Scafell in the pitch black. I thought my legs were going to be really sore but I’m pretty sure the adrenaline started taking over because I wasn’t all that sore (except for my ankles, see below) and hiking again actually felt good. I think we started sometime around 10:30 or 10:45pm but I was tired enough that I forgot to write it down. 🙂 This hike was kind of a blur, mostly because it was pitch black (we all had our “torches” on) and then once we got to the top, really windy and cold. I got one picture from this hike (that wasn’t completely black): 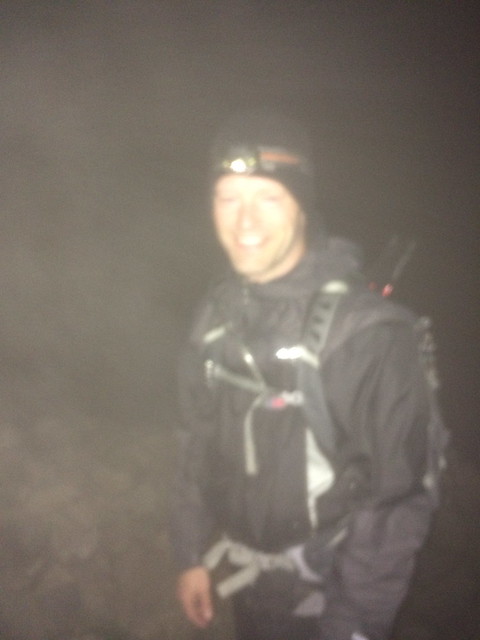 and finished the hike in 3:50 but we did this one as a group since the chance of one person getting lost on the mountain going down by themselves in the dark at 2am was pretty high. Best estimates for this one say that it’s about a 6 mile hike (in and back) and a 3200 foot elevation gain and as a group we did it in 3:50.

After another change of clothes, some coffee (fresh brewed by our crew) and a change of clothes we were back in the van for another multiple hour drive down to the Snowdon. I lost track of time (3am I think?) but I know that we eventually got to Snowdon around 8am and got started up the mountain at 8:30am. I also remember stopping at a rest stop somewhere in the middle of nowhwere and barely being able to walk and buying a box of Ibuprofen and something to drink, which did help the aches in my knees and ankles a bit.

Snowdon was / is beautiful mountain as well, just 15 minutes into the hike (we started from the Pen-y-Pass car park and took the Pyg Track) the view looked like this looking back to the car park: 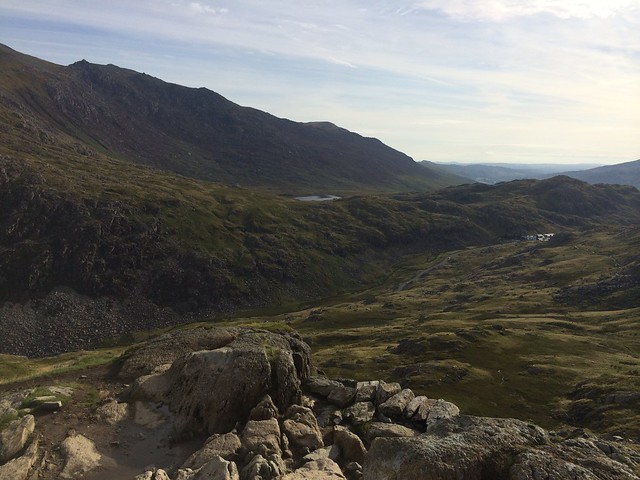 and just got better from there. We ended up getting up to the peak by 10:30am (didn’t complete all the peaks top to bottom in 24 hours, mostly because our van was pretty slow and we got delayed on the first hike by someone that didn’t make it down the mountain as quickly as everyone else) but then the 24 hour time limit is completely arbitrary anyway, the important thing… well the important thing is that you try to and then if possible, complete the challenge, no matter what the time. As with most things in life, it’s a mental challenge even more than a physical one, although it really helps to be in shape if you attempt to climb all three in 24 hours. There were multiple times when I was sitting in the back of the bus, with my ankles and knees and feet aching, thinking that it’d be so much easier to be back at home, drinking a beer, watching TV but in hindsight and I think I’ve realized this more and more as I get older, the mental rewards from attempting and then hopefully completing something like this vastly and dramatically outweigh any mental benefits of watching TV for 2 hours on a Saturday night. The feeling that you get when you’re standing on a trail looking up a mountain like this: 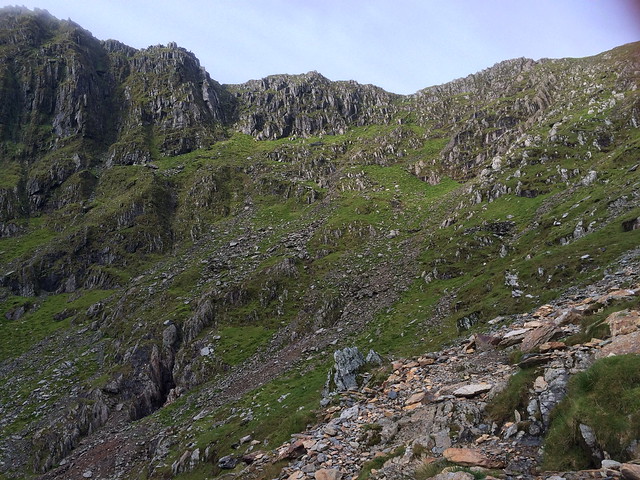 that you know you’re only about 30 minutes from being done with is pretty amazing. Our group got the top, like I mentioned, at about 10:30am, fully 24 hours after starting Ben Nevis the day before and we were beat but not beaten:

A grueling hike down that felt like it would never end and then we were back at van and each going our separate ways. I was and still am thrilled that I got to go and would love to find something like this to do once or twice a year once we get back to the US.

All in, the trip is supposed to be 27 miles and 9800 feet of elevation gain although adding up the numbers above I don’t see it. Either way, I’d do it again in a heartbeat. You should too.

Oh yeah, one last thing: I’ve got an amazing pair of hiking boots from Asolo but for some reason my ankles are NOT a big fan of said boots. I’ve been on a number of hikes with them now so I think they’re broken in (but maybe not?) but after each hikes the area around the outside of my ankles (both sides) hurt a bunch. Definitely was not the result of a twist, pretty sure there’s some kind of reinforcement in the boot that’s not jiving with the shape of my ankle, which looked like this on Sunday: 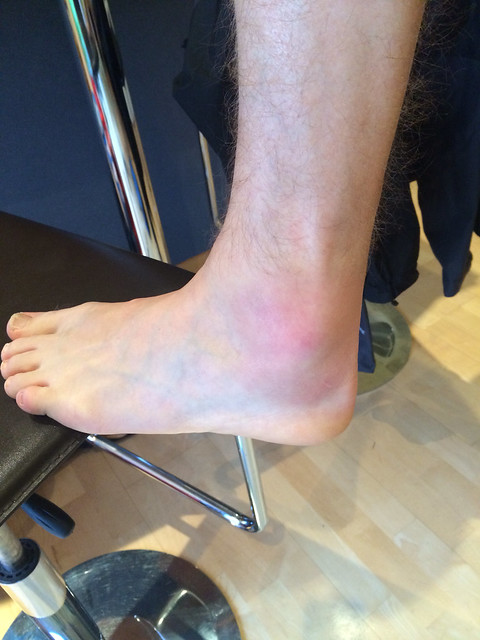 Not sure what to do on my next hike… tape? Different boots? I had / have good thick wool hiking socks, not sure how to fix this.