August 15th: Kind of lost track of what we did on the 15th. Pretty sure (definitely was one of the days we were there) that we ended up throwing the kayak and SUP near Morro Rock, which turned out to be incredible. We saw sand dollar beds, seals, otters, pelicans and jelly fish. It’s a great place to paddle if you have a boat / SUP.

August 16th: went back into San Luis Obispo to see a couple sites. Stopped at Mitchell Park, which was unremarkable. Walked into downtown, stopped at Phoenix Books, which I could have spent hours at but wasn’t fantastic for the rowdies in our crowd. Immediately after we hit Powell’s Sweet Shoppe because we apparently didn’t have enough wiggle energy, then got lunch, took pictures at Bubblegum Alley 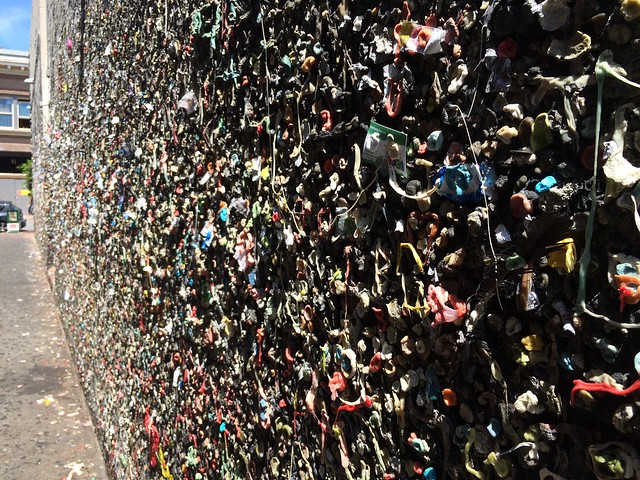 and picked up Mo’s Smokehouse BBQ to go for dinner.

August 17th: another relaxing day, didn’t do much. Did do lunch at
Taco Temple, which was epic. Highly recommended.

August 18th: back on the road. We picked up the trailer and followed my parents (who were going north before heading back to Mammoth) to Elephant Seal Vista Point 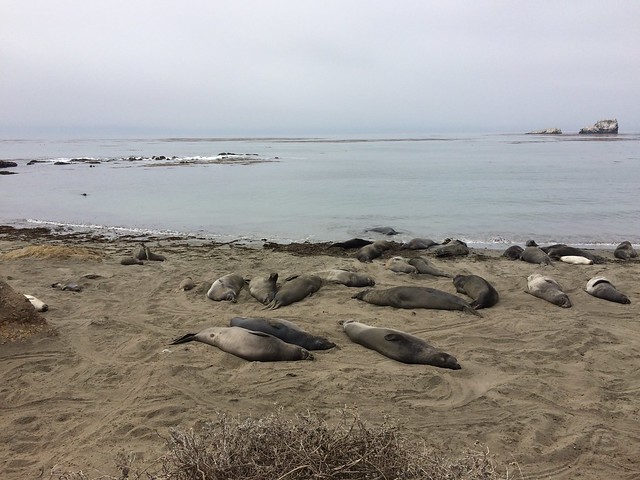 which wasn’t spectacular but apparently was at the low point for the season. Still fun to get out and walk around on our way back up the coast. Our ultimate destination for the day was Sunset State Beach Campground, up near Monterey. We camped next to a father / son combo, both of who were shoeless but wearing socks (?) in the campground that was 100% dirt. We were 10 feet for the other campers, this was probably the second dirtiest / unappealing places we stayed on the trip, but was cheap relative to the hotels we would stayed at around Monterey.

August 19th: Epic day. We bought tickets for the Monterey Bay Aquarium online and skipped what little of line there was when it opened at 9 or 10am. Beck and I got a special behind the scenes tour of the facility, which was actually really cool and resulted in Beck deciding that he wanted to be a marine biologist. Karen and I different opinions of what should happen next, both of us wanting to something in the water: she wanted to go to Elkhorn Slough, which apparently is a great place to kayak and see wildlife. I really really wanted to drop the kayak and SUP into the actual bay and tool around in the ocean because it seemed daring and fun. I won but I’ll never live it down. We ended up putting in at San Carlos Beach, paddled out a couple hundred yards with Beck and Reed and Karen in the kayak and me and Kai on the SUP. We saw some kelp and another pair of mommy and baby otters and after about 10 minutes being around the kelp… BOOM, a shiny black dorsal fin popped out of the water. I’ll be honest: I had had my reservations on the way out about paddling with the Kai (only 5 at the time) on the SUP with me as the waves were pretty big but we were doing ok. Karen, with Beck and Reed, was decidedly less enthusiastic and at the sight of the fin, almost immediately turned around the kayak and said very seriously that she was headed back to the shore, thinking that it was an orca or something dangerous. I somehow convinced her to stick around (99% sure that it was just a dolphin) and we then proceeded to observe numerous humpback whales breaching, which was amazing. I vividly remember telling Kai (5) that he’d likely never be this close to a whale again. Pretty sure that Karen was ready to kill me after this, we headed back and took this picture: 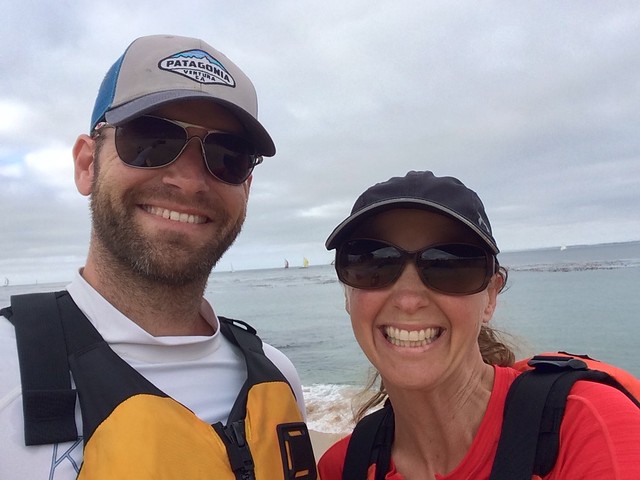 which is a combined “OMG, we’re alive!” and “OMG, we kayaked with whales!” view of the world.

Dinner at Pelican Pizza on the strip there by the aquarium and then sleep.

August 20th: Lots of driving, then the California State Railroad Museum in Sacramento, then a lot more driving, then finally arrived at Manzanita Lake in Lassen Volcanic National Park, a really nice campground.

August 21st: There’s a fun ring road around Lassen where you can see all sorts of interesting geological features. We drove to the visitors center, stopped at some great bouldering boulders, hiked the loop to Bumpass Hell

and back and then retired for the night.

August 22nd: back on the road, this time aiming for Crater Lake. On the way we stopped off at the Lava Bed National Monument, hiking up and down into a number of the caves (lots of fun for the boys) and then on the way out driving to Petroglyph Point, which was slightly underwhelming but still interesting to see. Many hours later we finally pulled into Crater Lake for our stay at Mazama Village Campground. Campfire and then a really great ranger program by a ranger named Chris 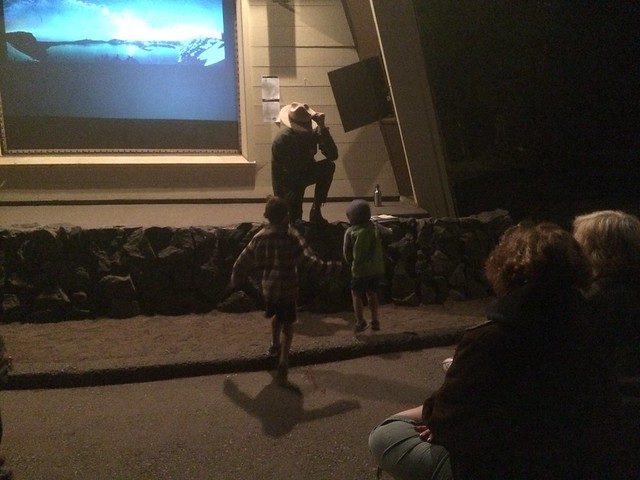 whose parents had driven in to hear him give a talk. Boys had a great time.

August 23rd: we really wanted to do one of the boat tours around the lake but the only one that was available was the 8am(IIRC?) departure, which required us to be up relatively early since it was a 30 minute drive and a 30 minute hike down to the boats but that turned out to be a blessing in disguise since the lake was untouched and perfectly still at that time of the morning:

A smooth boat ride later, we hiked up to the top of Wizard Island, had some snacks 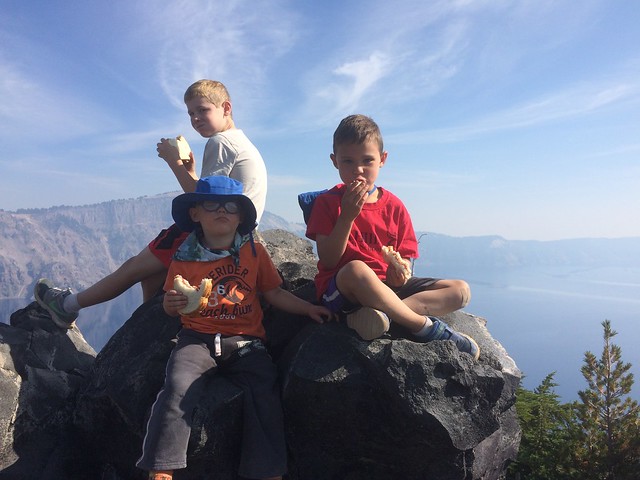 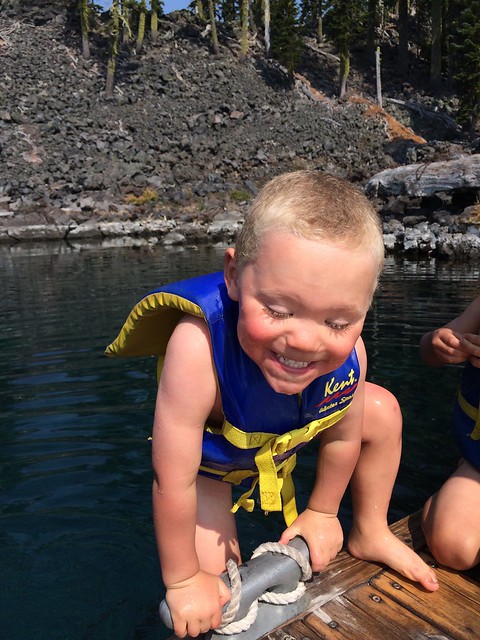 and then have me pull them out, which was fun to watch. 🙂

We stopped for lunch at the lodge and then headed back to the campground for our last night in the trailer before heading back home.

August 24th: lots of driving… back home and then at 6:30pm, soccer practice had already started.