We thought going into the trip that there’d be a couple days of long driving but for the most part we were able to make a bunch of stops every day and see a bunch of things… except this day. Think the Google Maps estimate for this day was north of 4 hours so we tried to get an early start so that we could get somewhere and maybe do something in the latter half of the day. The guesthouse we stayed at didn’t have a formal breakfast but he provided tokens for us to use at a local “bakarí”, which was fantastic. We had donuts and ham and cheese croissants at Aðalbakarí and then hit the road.

Our first stop was for an easy to find geocache that was at a statue in the middle of nowhere, everyone got to stretch their legs for a bit and then we packed it in again and drove on roads like this:

at which point I must now pause and say that driving around Iceland was like watching a really long and slow but extremely beautiful nature movie. I thought a number of times that Iceland is like the island that resulted from Hawaii (volcanoes, oceans, etc.) and Alaska (glaciers, snow, fishing, etc..) and some state in the middle of the US (cows, sheep, horses, etc..) all getting together and saying “let’s make an island that has the best parts of all of what we have.”, which is to say that driving wasn’t a chore at all, except for the gravel roads in some places… OH and the precarious cliffs that we drove right on top of to get out of Siglufjörður, other than that though, amazing.

Second stop, which I can’t remember how we found (think it was the navigator) turned out to be really cool. I think she was looking for geocaches as a place for us to stop and she found this geocache at an abandoned house (had been abandoned for 70 years) that you had to drive off road to even get close to. Apparently it’s name is Svarðbæli, but you can read more about it here. We drove out the 4×4 road to about 1/2 mile away and then hoofed it on the gravel road the rest of the way. The geocache itself was a bear to find (had to enter the really old house, climb up to the second floor and then it was hidden away in the rafters, I couldn’t find it, Karen found it later) but the views and the walk were brilliant:

Everyone got to horse around a bit and get their wiggles out which was nice. Didn’t see an option to put an offer down on the house but if I was a hermit, I think I’d want to live here:

We made our picnic lunch in the back of the car, if I remember correctly this was the day that someone decided that they didn’t want a PB&J for lunch which meant that they had to wait until dinner for food. Doesn’t pay to be fussy in our family.
And then we drove:

until our next stop, a hill called Helgafell, which is called “holy mountain” and is a 227 meter high volcanic cone that, drum roll, had a geocache on top, which we found and then got to enjoy the views from the top:

A short drive later and we were at our “hotel” for the evening in another little town, this one called Stykkishólmur, in probably the smallest of all the rooms we had on the trip but we made do. We got there a bit early hoping to find something to do but there wasn’t much open at all (more stuff in the summer) so we hiked up to the top of the lighthouse:

which is called Súgandisey and tried to make sure no one fell off a cliff, then hoofed it back a mile or so into the little town center where the only place to eat that was open at 5pm was a little pizza shop called Stykkið, which ended up having GREAT pizza.

Kids went to bed, I missed a geocache on top of the lighthouse and had to go back at night with my headlamp to find it: 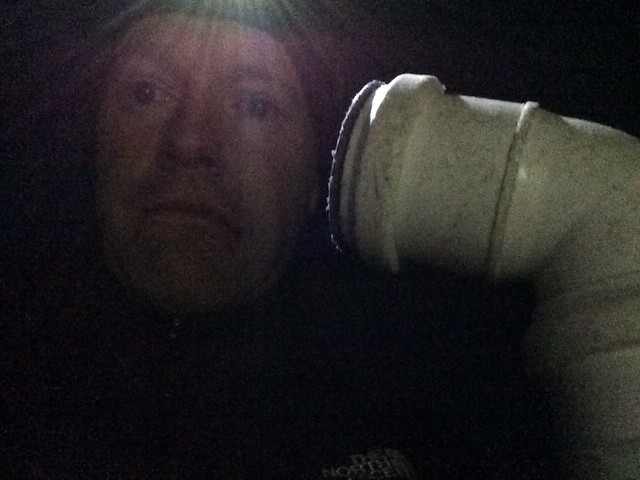 which wasn’t too hard to do, short of the wind and cold.
Stats: